Thanks to Justine Liberos for the translation

The Thracian warrior during the fifth and sixth centuries BC

The emblematic enemy of the Greek hoplite in the collective imaginary is the Persian who came to invade the land of cities, threatening the democracy of Athens and the freedom of all the Greeks. Such a vision hides the relationship between the Greeks with a people a lot closer and not very mentioned, the Thracians, who turned out to be allies as well as enemies.

Mostly present in the region that the Greeks called Thrace (modern day Bulgaria), maybe as a reference to the son of Ares, Thrax [1] EURIPIDES, Alcestis, 58. These warriors left their mark in Greek iconography and later the art of Greek war thanks to their appearance and they ways of fighting that were rather peculiar for their southern neighbors. We can find over a hundred tribes with approximate localization from the coasts of Pont-Euxin (modern day Black Sea) to the surroundings of Macedonia, and from the river Danube to the north of Greece. The tribe of the Odryses, situated in the current valley of Kazanlak, in  modern day Bulgaria, is undoubtedly the one that used its power best by funding a lasting kingdom under the form of a tribal confederation, under the reign of King Teres the First, in the first half of the Vth century BC [2] MARTINEZ Jean-Luc, BARALIS Alexandre, MATHIEUX Néguine,STOYANOV Totko and TONKOVA Milena , The Epic of the Thracian Kings, Louvre Museum, Somogy art edition, Paris, 2015, page 379.

Known for their ferocity and their love of loot, Thracians represented for Greek cities in constant rivalry special mercenaries.

Recognizable by their clothes covered in geometric and colored patterns, Thracians warriors have left a mark on the spirit of the hoplites, fighting with or against them. They were wearing as headgears Phrygian caps with, on the sides, big hanging earflaps to protect their neck from the cold, or hats made of fox fur (called alopekis [3] WEBBER Christopher, The Gods of Battle, The Thracians at War 1500 BC-AD 150, Pen and Sword Military, 2011, pages 28-29). The long Thracian coats, called zeira [4] HERODOTUS, History, VII, 75, were loose and covered the whole body of the fighter who had to move in its originary region such as for instance the mountains and forests of Rhodopes, in the center-south of modern day Bularia, which are described as rough and cold by Xenophon (Anabasis,VII, 4, 2). It is these coats that came to us through the Greek Attic ceramics with very rich decorations. The same ceramics show shoes going above the knee that are called embades, covering the foot entirely unlike Greek or Roman 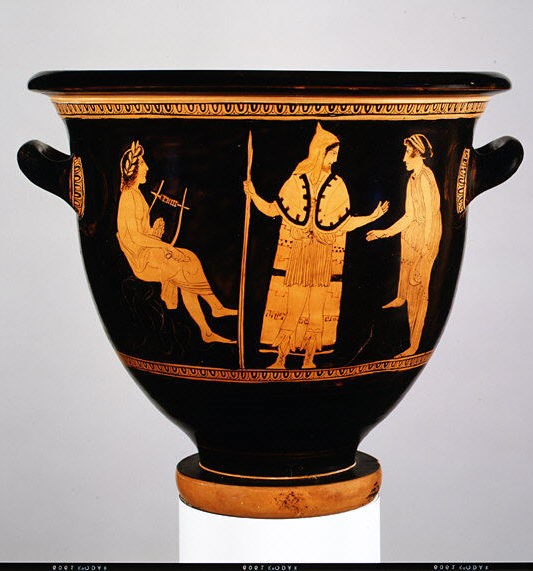 shoes. The tunics are similar to the chitons of the Greeks, even though they are longer and often decorated too. 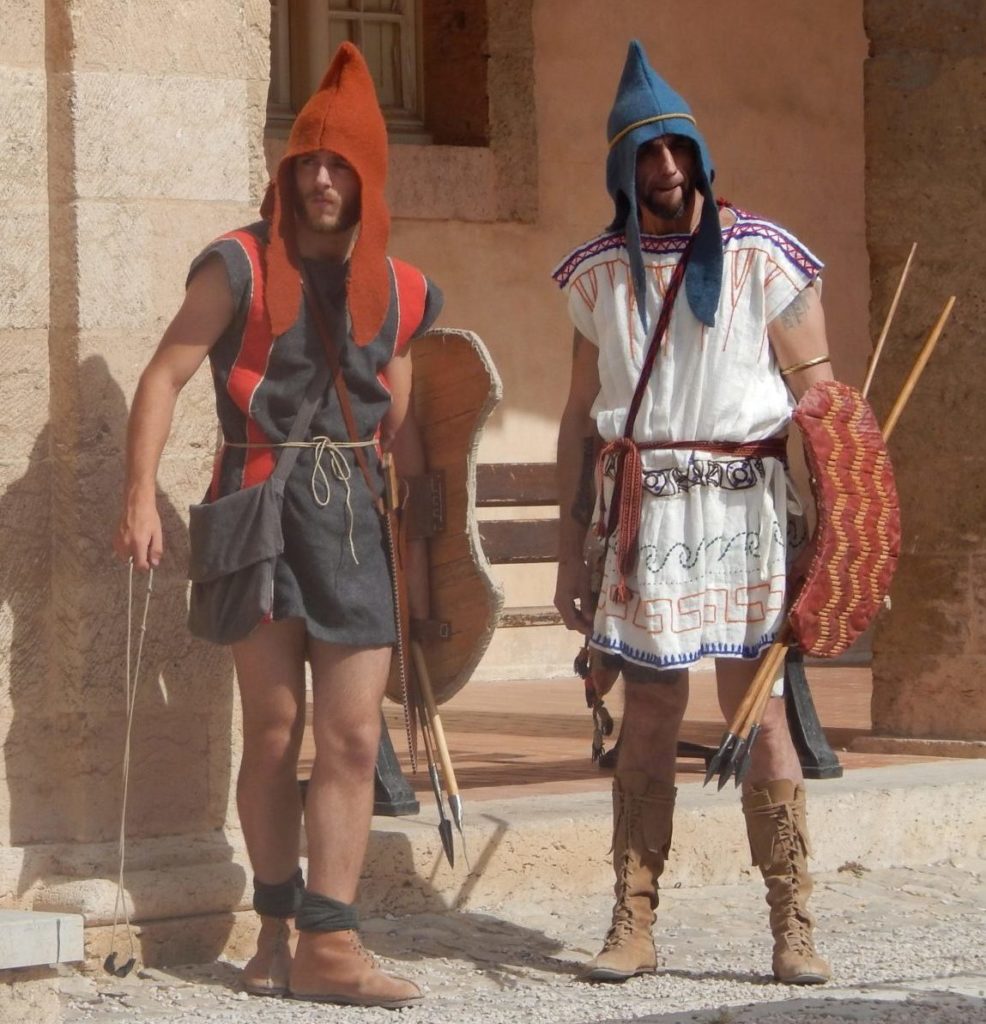 These warriors distinguished themselves to the Greeks by their quickness in action. Indeed, apart from aristocracy and those having the means, the Thracians preferred fast attacks and hand shots against the enemy rather than the direct contact that the hoplites liked best. Preceding their assault of terrifying howling and of the sound of metal knocking together to scare the opponent [5] STRABO, Geography, VII
TITUS-LIVUS, Roman History, 42, 59
THUCYDIDES, The Peloponnesian War, VI, 3, 126, they would throw themselves at the enemy by harassing them out of reach of their spears before going backwards to avoid the counterattack of the opponent. Getting tired very quickly, the pursuers would turn around to join the main army corps but thus exposing their back to the Thracians. The latter, on the lookout, would come back again to slaughter these isolated men [6] Like in the battle of Sphacteria in 425 BC, where the light troops, including the peltasts, put down a Spartian contingent this way, and sealed the outcome of the battle by going around the enemy along the cliffs. These Greek peltasts were probably thus equipped after the confrontations between Greeks and Thracians. The latter have thus greatly inspired the armies of the cities during the Peloponnesian war.
Source: THUCYDIDES, The Peloponnesian War, IV, 15-39.

The Thracian warriors are thus equipped with projectile weapons such as the javelin, that they carry in great number to harass to opponent. They also have the pelte, a very light wicker shiled in the shape of a crescent moon (to clear the view of the shooter when he is aiming), often with a strap to carry it on their back during the frequent withdrawals [7] XENOPHON, Anabasis, VII, 4, 17. The cut of this shield was mainly put on the top of the shield. This type of fighter is thus named the peltast: the one who carries the pelte. This term would become more general to name shooters, such as the gymnoi or the psiloi.

The Thracian peltasts could have a much bigger panoply, including knives (to defend themselves because these light troops were very vulnerable in close fight) as well as swords or spears of various kinds, thus opening to them a great diversity of formations of fight. The Thracians were far from being so lacking in hand-to-hand. This is mostly due to the minor use that the Greeks would make of them on the battlefield: using them as skirmish troops, the vision of the Thracian warrior lacking in close fight 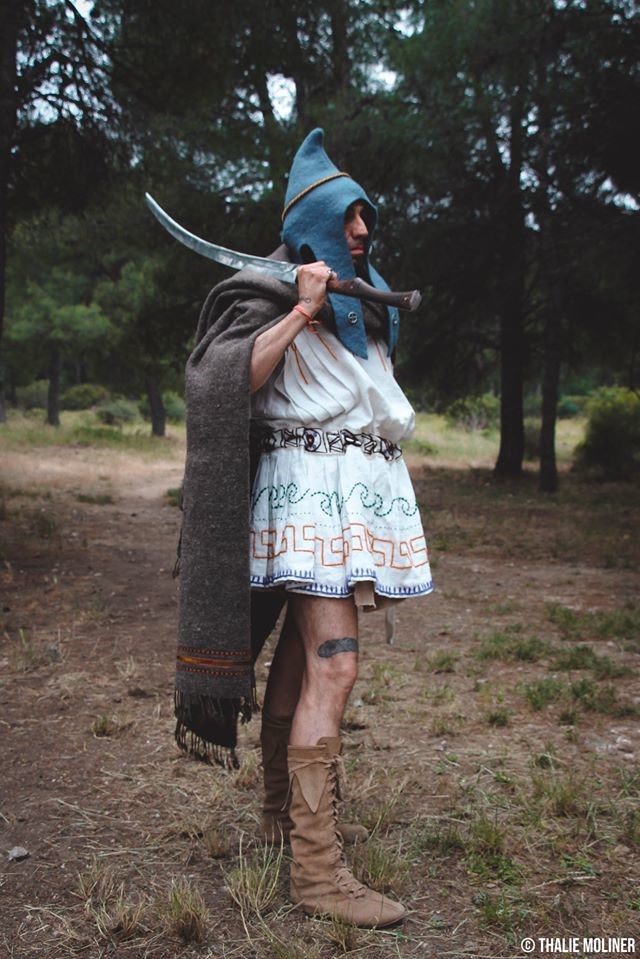 would endure through the written sources of the Greek authors. The Thracian knife or sword are often known as a sica. Presenting itself as a short curved blade, it could easily divert the defenses and the armors of the opponent [8] Visible on the hunting scene on the tomb of Alexandrovo, IVth century BC, Bulgaria.. It is mostly possible to see it in action in the fights of Roman gladiators with the panoply of the thraex, which weaponry is inspired by the Thracian warriors met by the Romans. In the same way, the rhomphaia is an impressive weapon with a long blade curved forwards to give powerful hits [9] Visible on the battle scenes on the tomb of Kazanlak, IVth century BC, Bulgaria.. The Romans changes their helmets and their armors because of a similar weapon (the falx) during the dacian wars (101-106 AD.) [10] SCHMITZ Michael, The Dacian threat, 101-106 AD, Caeros, 2005, page 31. Many Greek swords similar to the kopis were found in many tombs, such as that of Seuthes III or of Kersobleptes (IVth and IIIrd centuries BC, tombs of Golyama Kosmatka and Zlatinistsa-Malomirovo, Bulgaria). The spears were also very used by the Thracian warriors. 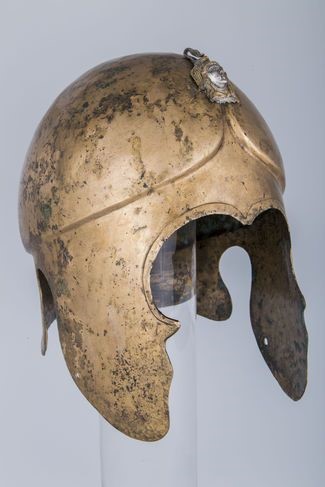 Present on some iconographies, the latter would vary according to the style. The Greek dori, with a peak and a stub, is present in the tomb of King Kersobleptes and on some iconographies but some sources deal with long spears (about 27 feet or 3 meters) which would have inspired the sarissa of Iphicrates and Philip II, adopted by the Macedonian phalanx [11] WEBBER Christopher, The Gods of Battle, The Thracians at War 1500 BC-AD 150, Pen and Sword Military, 2011, pages 112-115. It is also possible that the Thracian warriors would have carried oval shields like the Celts but of which design would likely be closer to the oval illyrian shields (which is not impossible, Thucydides telling in his work The Peloponnesian War some operations in Thrace led by Illyrian mercenaries). An umbo (metallic piece situated at the centre of the shield) from the IInd century BC was found at Montana but the frescos of the tomb of  Kazanlak (see footnote 9) show fighters armed with these great shields. Moreover, the contact with the dacian tribes of the north-east handling similar but smaller shields has probably implied a use of this equipment by the Thracian (which would explain the reduced size of the shields of the tomb of Kazanlak).

The use of oval shields by the Thracians is absolutely likely but it is difficult to establish whom between the Celts and the Illyrians is at the origin of it.The Thracian warrior aristocracy, including the king or the prince, leads the men to battle, most often on horseback, forming a cavalry unit [12] As testifies Xenophon with the king Seuthes II leading his troops against the Thyni (Anabasis, livre XIII) or Thucydides with the king Sitalkes against Perdiccas (The Peloponnesian War, II, 3). Armed with swords, spears and javelins too, it is ready to interfere at any moment on the batllefield. Heavily armored and richly decorated, this elite wears helmets with various styles. The Greek chalcinian helmet is the one that was found the most in Thrace, with local additions such as crests and brackets [13] MARTINEZ Jean-Luc, BARALIS Alexandre, MATHIEUX Néguine,STOYANOV Totko and TONKOVA Milena, The Epic of the Thracian Kings, Louvre Museum, Paris, 2015, pages 93, 127. The second most common is the phrygian helmet, often with a mask to protect the face (the stylized facial protections meant to imitate a face on the helmet being a typical Thracian element) [14] WEBBER Christopher, The Thracians 700 BC-AD 48, Osprey Publishing, 2008 > Helmet of the tomb of Sashova Mogila. The armors found in Thrace are « bell-shaped » or « with splints ». This model of armor was very widespread in the archaic time in Greece before disappearing slowly at the beginning of the classical period. However many armors of archaic model produced in the the Vth and IVth centuries BC were found in Thrace, like the armor of Svetitsata [15] OGNENOVA Ljuba, The bronze body armors found in Thrace, Report of Hellenic letters, 1961, pages 501-538. Maybe these warriors were reusing old equipment? The greaves (protections for the shin) are also decorated with patterns rich in relief, often in golden silver (it is however possible that the ones found at Zlatinitsa-Maromirovo in 2005 and Moguilanskata Moguila in 1965 were for ceremonial use, like the gorgerins and the chests found in Mezek or Eski Saghra in South Bulgaria) [16] WEBBER Christopher, The Thracians 700 BC-AD 48, Osprey Publishing, 2008 > pages 20, 35, 36, 37.

It is extremely difficult to know exactly how these warriors fought and what they looked like: the Thraces have not indeed left any written text in their language (today lost). Several historians fight to recreate several words from Thracian inscriptions written in Greek alphabet, and the latter are very rare. All the iconographies and textual sources concerning them came to us from the Romans and the Greeks who saw them as barbarian tribes. Directly in contact with the Greeks for the cities of the north-east of Greece, the Thracians were already, before the Persians, a foreign figure used to illustrate the very exotic stereotype of the non-Greek, which explains why Thracians and Persians, in Greek inconography, look a lot alike: beyond representing the enemy or the ally, they represent alterity. Archaeology and the great discoveries made on the ancient Thracian territories in modern day Bulgaria and Romania have taught us a lot about this warrior society, whose customs were sometimes very close to their hellenic neighbors, like the reports of excavations of the tombs of the valley of Kazanlak showed [17] MARTINEZ Jean-Luc, BARALIS Alexandre, MATHIEUX Néguine,STOYANOV Totko et TONKOVA Milena, The Epic of the Thracian Kings, Louvre Museum, Paris, 2015 ( œuvre complète ). The Thracian warrior is therefore far from being what we believe if we rely on Greek testimonies only. Research reveals each year new elements on this people little known and forgotten of the history of the Antic world.