Thanks to Hervé Abillard for the translation

This short article does not aim to be an extensive presentation but rather a brief description over the history of greek ceramic in order to answer to the most common questions. In this first chapter we will begin with a global classification per style, then a typological [1] Study of the shapes approach of this ceramic before finishing with a few specific uses.

First we must acknowledge the five main styles of ceramic, which evolve with time as well as their geographical locations. We typically spread these five styles from 1050 B.C [2] Mycenian period, heroic age of the Illiad and the Odisseyr to 146 B.C [3] Fall of Corinth against Rome, Last independant greek kingdom

This style is usually imputed to the mycenaean civilization, which, since the adorn the vases of black varnish patterns and turns the pottery bronze age, on a potter’s wheel rather than manually. These are typically decorated with simplistic and geometric patterns, such as strip and circles. 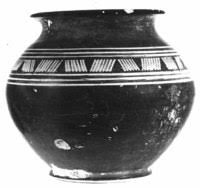 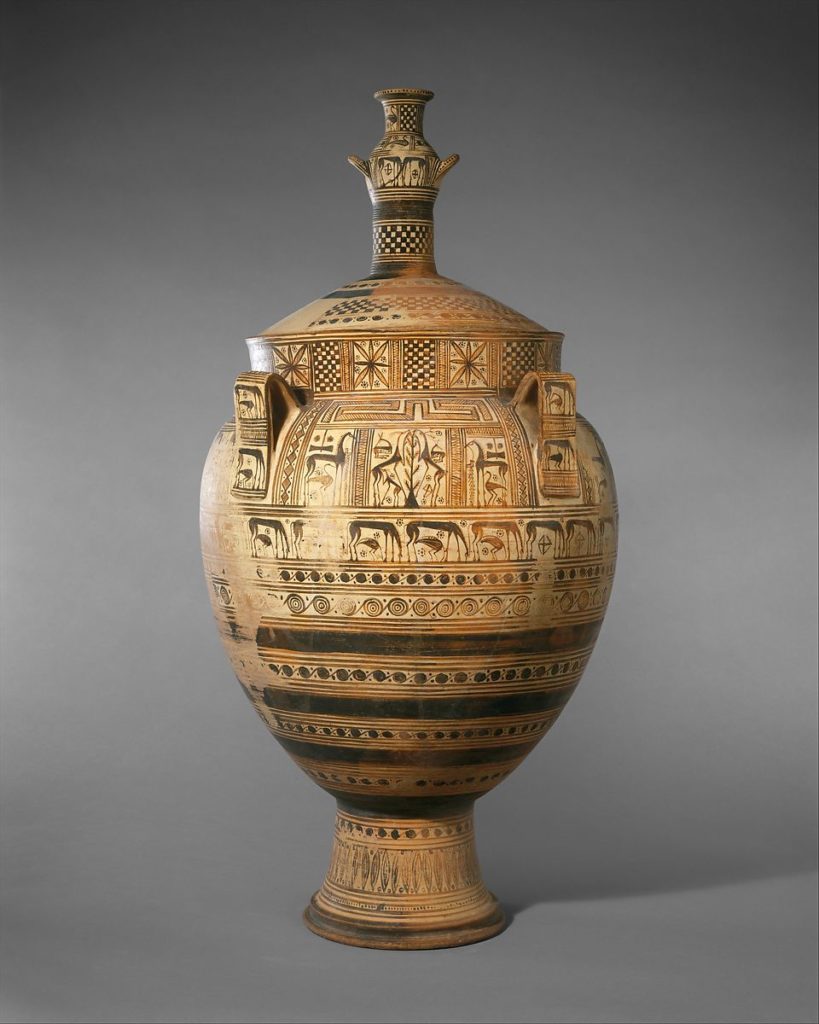 In continuity with the proto-geometric style, ceramics bedeck themselves with meander, “greek” triangles and other geometric patterns. In this style stand the ancient geometric (900-850 B.C) with only geometric patterns, then the middle geometric (850-770 B.C) with the emergence of figurative adornment (mostly animals) and space saturation, and finally, the moder

geometric (770-700 B.C) with human figure. A great number of those vases were found in one the athenian burial ground, the Dipylon, which will gave its factitious name to the “Dipylon Master”, a vase painter active around 760-750 B.C. Other schools appear all over Greece, in Corinth, Boeotia, Argos, Crete (also in a sterner geometric style) and Cyclades.

As its name states it, this ceramic is influenced by the oriental design, which drains its inspiration from nature, the animal world and mythology. We see the appearances of sphinx, griffins, lions, et caetera, with way more realism than under the geometric style. It firstly emerge in Corinth, who then exported the techniques to Athens, which modifies it according to its own influence: developing the first marks of polychromy, white, black and red, intertwine to give live to the depictions. 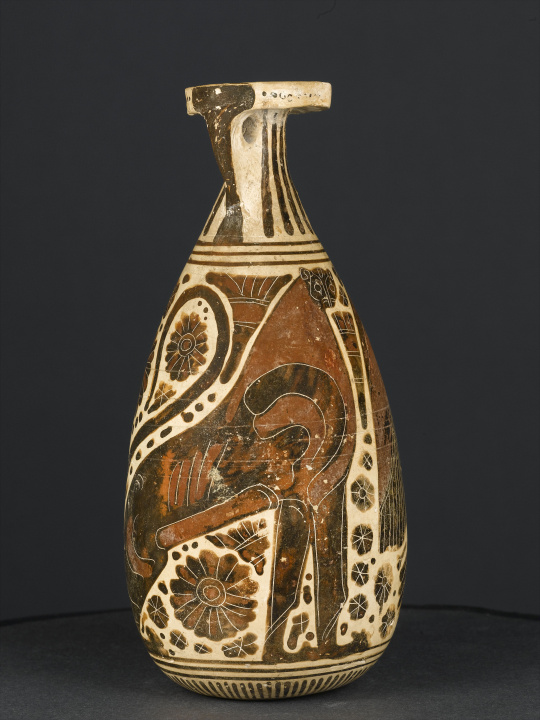 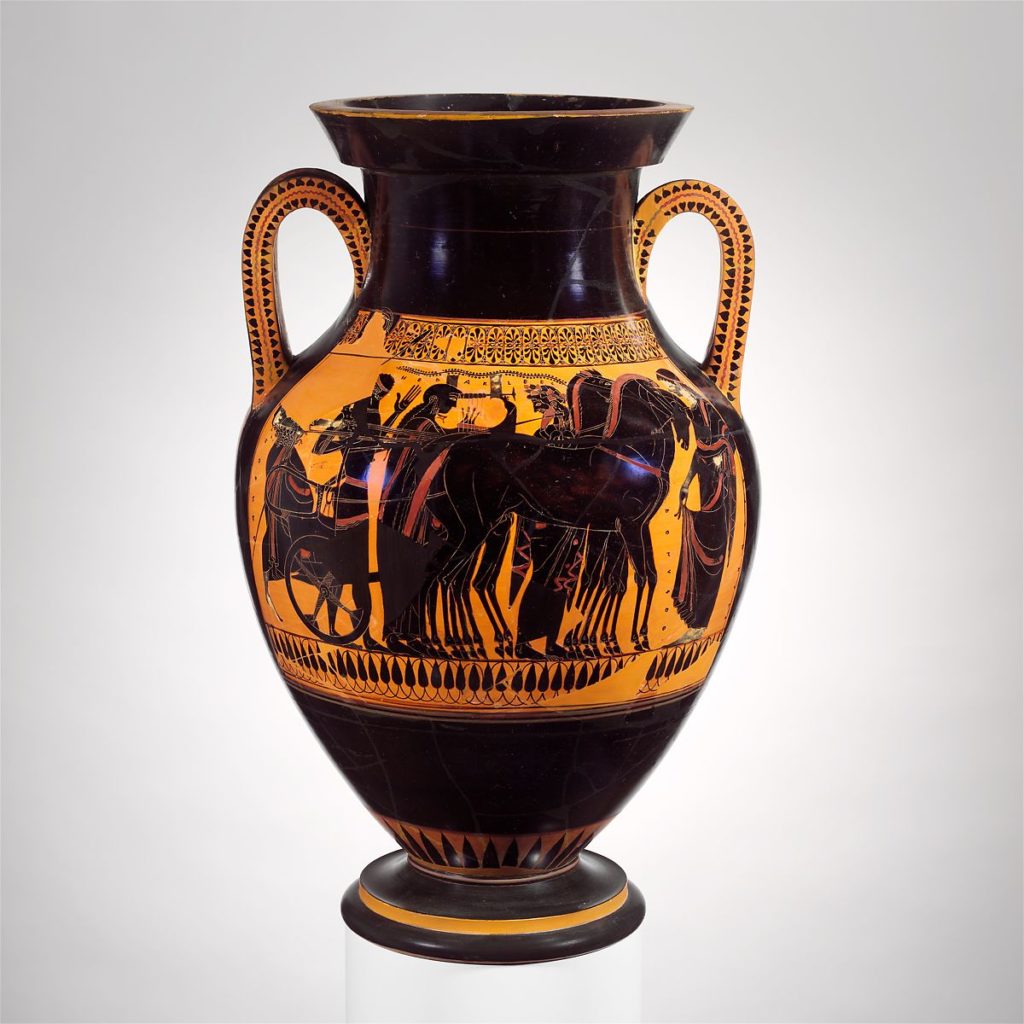 Though black figures exist since the 7th century in Corinth and other regions of Greece, it is Athens which carries it to its pinnacle during the archaic period. It presents black figures designs upon a clay background, therefore on red background in Athens case. Figured vases become more common and are no more confined to a ceremonial use, but also everyday life.

Red figures are popularized by attic ceramic from Athens, with a production of industrial scale and monopolizing the market as the only school of

technique. According to the legend, the first to use this style is Andokides. It is a reversal of the black figure, in its initial stage there even are occurences of bilingual vases, combining black and red figures. This style allows an evolution and a refinement of the designs, the potter and painter Euphronios specialized in the representation of the body muscles. Due to the destruction of Athenian workshop during the second greco-persian war, the production of black figures are abandoned to the profit of the red, which take over the stylistic landscape. Designs are further sophisticated, representing mythological scenes, battles and everyday life representations. Space saturation will slowly come back, floral patterns veiling voids, as well as polychromy with touches of white. During the hellenistic period the technique simplifies itself, with simple settings and even paintings after the baking process. 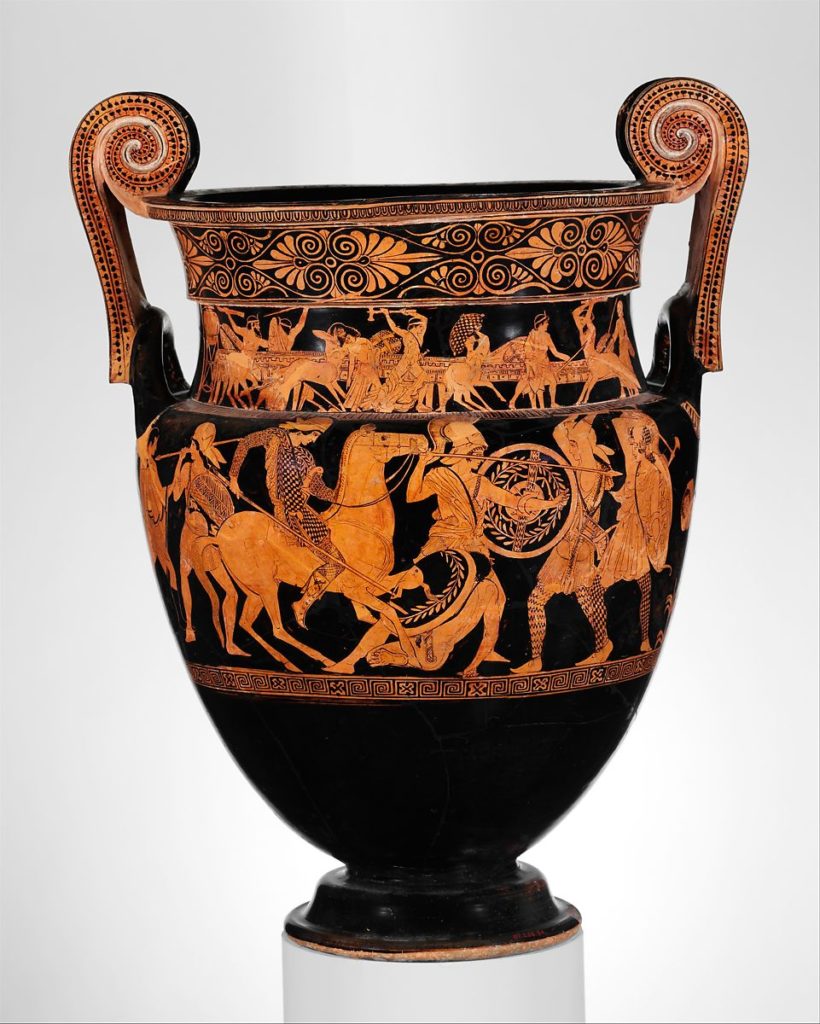 Far from Athens, in Magna Grecia the apulian region stands outwith its own ceramic technique, of equivalent quality to the athenian’s one, and will last during the hellenistic period thanks to the painter Darius who represents contemporary of Alexender the Great. With its own italic style the apulian ceramic is exported in Greece as well as the whole mediterranean basin. It usually identified by its saturation of icon of heroic theme, numerous details, and for the armament enthusiast the representation of apulo-corinthian helmet. A last subtype, the red figure on white background, typically in the mortuary field, especially upon lekythos which contain perfumes. However if red figures predominates, black figures are used on occasion on honorific vases, such as panathenaic amphora