Reenactment of a scaled linothorax

On many iconographies distributed from the archaic period to the hellenistic period, we can see many depictions of warriors wearing a Linothorax-type armor or Spolas-type wholly or partially covered with scales.

The purpose of this document will be to present to you the process and the reasoning that led to each of the working hypotheses as well as the different manufacturing stages necessary for my project.

I would also address the possible biases which make it difficult to make a fully historical depiction, despite the will to stick as close as possible to my sources.

My goal for this project is to create the most accurate possible reproduction of the armor of the character on the right (Cycnos).

This iconography comes from an Attic red figures crater dated around 510 BC. 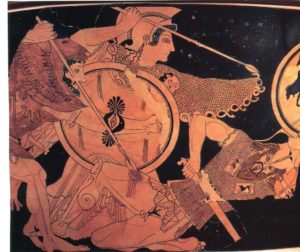 Why choose this one?

Because even if the representation is older than the period that I am reenacting, we can find many depictions of armor with similar scales, not to say identical, in iconographies ranging from the archaic period to the Hellenistic period. This representation has the advantage of showing many details of the armor seen from the front. I also cross-checked with the other depictions to try and interpret the missing information as accurately as possible. 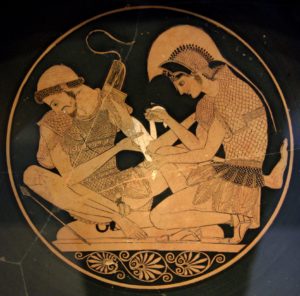 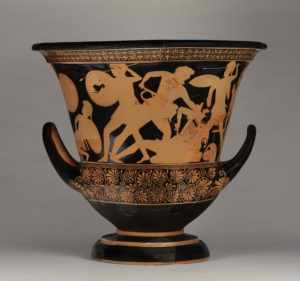 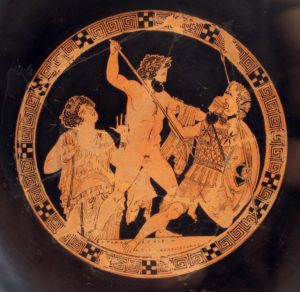 The first step was to choose a support, since having only iconography without textual indication it is difficult to determine if we are dealing with a Spolas or a Linothorax. Indeed, the two armors having a similar silhouette, they have very similar appearances on the depictions. Based on this observation, I chose linen because it seemed to me a coherent choice since the Spolas is a less prestigious armor.

Therefore I will work on a Linothorax base

The difficulty in the choice of the material of the scale is due to the fact that we have, to my knowledge, no archaeological discovery which is similar to a scale of armor, and also no textual mention.

Which leaves us again with two hypotheses:

A noble material during Greek antiquity, used to make  armor parts covering all areas of the body.
Pros:

used throughout history to make scale protections, it is a valid hypothesis.
Pros:

I chose bronze scales for several reasons. First of all, prestige, the vast majority of depictions show fully geared warriors, and with very elaborate armor parts. This tends  to show that they are wealthy, to be equipped with leather armor when you can afford cnemids and an ornate bronze helmet does not seem coherent to me.

Then a logical reason, In a good proportion of the depictions (like that of my model), the scales are depicted in a small size, which does not seem to stick with the thickness of leather necessary to give an optimal protection. In addition, historically leather armor scales from other periods generally have larger scales than their metallic equivalent.

To create the lion ornated pectoral plates, and stay coherent with my previous choices, I will go with Bronze once again.

When it comes to the pattern, two techniques are available : Engraving or embossing, both being profusely source, I will orient my choice towards embossing because once again it requires more craftsmanship qualities than engraving hence it fits the hypothesis of an armor worn by a rich person. Also engraving seem less valid to me because the pattern is not a simple outline but filled.

The damages on the original artwork allows to see little details about it, but still we can make a few observations :

The presence of a flap falling vertically, displaying lion patterns similar to those found higher allowing to formulate the hypothesis of a leather belt on which bronze plates are fixed

The body of the belt that goes around the combatant is decorated with recurring geometric patterns, either squares or meanders

Creation of the Linothorax

Choice has been made to go with a 12 layers of fabric linothorax, which is not a lot but seems sufficient due to the weight and thickness added by the scales to reinforce the toughness. Furthermore, depictions usually shows it quite thin, which is not enough to be sure that they were indeed thiner than usual linothoraxes but coherent with the idead of the layers of linen fabric being used only as a structure for the whole armor.

A cardboard pattern has been made and reported as many time as there is layers.

The whole divided in 3 parts :

The chest part : made in one piece going around the chest
The shoulder part : with the two pectoral flaps
The Pteruges belt : it is difficult to see on the depictions if the pteruges/chest part is supposed to be in one part or if the belt is a decorative way to hide the junction between both

Then the layers were stuck together with glue (Wood/Skin/Fish) being careful with the dilution : Too much water, the glue does not stick enough, Not enough and it penetrates the fabric layers less. It is necessary to make a few try to have the right dosage and obtain a final result which sticks but is not changed into a brick. The ideal results being a combination between flexible and resistant.

Note : The spreading of the glue stretches the linen fibers and widens the final piece. This is not an issue and it’s better to wait to be done and use the extra material to adjust on measure.

Unlike a classic linothorax, I chose to divide each part in two : One of 9 layers, and one of 2 layers to ease the sewing of the scales (already difficult) on the thinnest and assemble them once done. 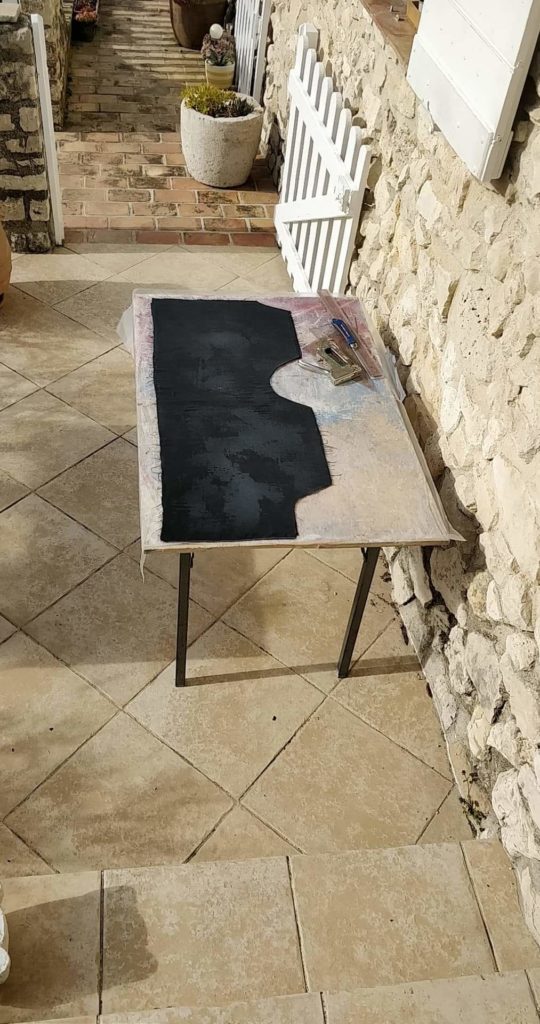 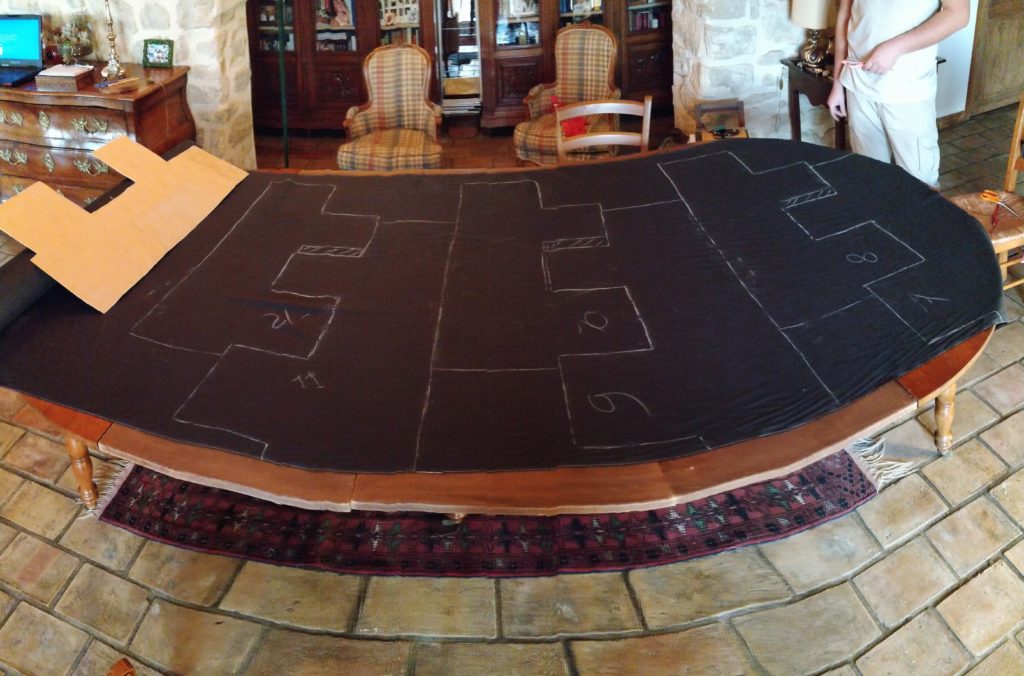 The scales are sewn with waxed linen thread (Important to limit the wearing against the sharp edges of the metal) on the 2 layers structure, starting from the bottom. The scales are fixed side by side horizontally and superimposed vertically as it seems to be the case on the source.

The difficulties of this part :

For the top of the shoulders, it was necessary to choose if the direction of the scales should change in order to keep the interest of the protection from the scales against a vertical blow or remain the same to have continuity for the shoulder flap.
I chose to keep the continuity because the representation seems to show it and the probability of a blow from behind in phalanx is unlikely, but the two seem to exist in other representations and are therefore as valid one as the other.
The pteryges are only a formality since their width has been calculated beforhand. 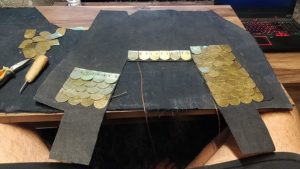 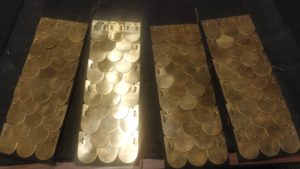 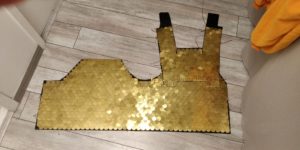 The 9 layers are glued to the 2 layers + the scales, once the glue has set well we were able to adjust all the cuts to approach the final shape.
A final twelfth layer of better quality linen is added to make the lining more comfortable to wear.

The leather border protects the edges and hides imperfections. It is assembled with a linen thread that is finer than the one holding the scales.

Assembly of the 3 main parts